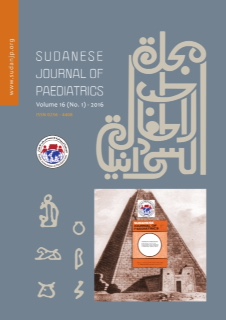 The cover captures one of the pyramids of the Kushite rulers of Meroe, the Southern Capital of the Napta / Meroitic Kingdom (800BC-350AD) which flourished due to a strong iron industry and international trade involving China and India [http://en.wikipedia.org/wiki/Mero%C3%AB]. Also shown is the Meroitic script, the indigenous alphabet consisting of 23 letters, which has been developed in the Naptan Period at about 700-300BC. The Arabic script of the “Sudanese Journal of Paediatrics” was designed in 1984 at the Sudan University College of Fine Arts by Taha El Atta, PhD. The logo of the Sudan Association of Paediatricians and the first issue (Volume 1, No. 1, 1977) of the Sudanese Journal of Paediatrics (SJP) are shown displayed on the wall of the pyramid to commemorate the inclusion of SJP in PubMd, which includes more than 22 million citations in its database for biomedical literature.  Indexing SJP in PubMed confirms its prestige in providing an international platform for pediatrics and child health, and will allow greater visibility and impact of its published articles. To learn more see Editorial.